Your child's sinuses are not fully developed until age 20. Although small, the maxillary (behind the cheek) and ethmoid (between the eyes) sinuses are present at birth. Unlike in adults, pediatric sinusitis is difficult to diagnose because symptoms can be subtle and the causes complex.

How do I know when my child has sinusitis?

The following symptoms may indicate a sinus infection in your child: 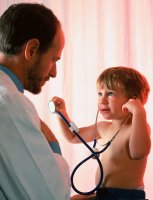 Young children have immature immune systems and are more prone to infections of the nose, sinus, and ears, especially in the first several years of life. These are most frequently caused by viral infections (colds), and they may be aggravated by allergies. However, when your child remains ill beyond the usual week to ten days, a serious sinus infection is likely.

You can reduce the risk of sinus infections for your child by reducing exposure to known environmental allergies and pollutants such as tobacco smoke, reducing his/her time at day care, and treating stomach acid reflux disease.

How will the doctor treat sinusitis?

Most children respond very well to antibiotic therapy. Nasal decongestants or topical nasal sprays may also be prescribed for short-term relief of stuffiness. Nasal saline (saltwater) drops or gentle spray can be helpful in thinning secretions and improving mucous membrane function. If your child has acute sinusitis, symptoms should improve within the first few days. Even if your child improves dramatically within the first week of treatment, it is important that you continue therapy until all the antibiotics have been taken.

Your doctor may decide to treat your child with additional medicines if he/she has allergies or other conditions that make the sinus infection worse.

If your child suffers from sinus symptoms that last for twelve weeks, two major symptoms or one major symptom and two minor symptoms, this is known as chronic sinusitis. If your child has chronic sinusitis or recurrent episodes of acute sinusitis numbering more than four to six per year, you should seek consultation with an ear, nose, and throat (ENT) specialist. The ENT may recommend surgical treatment of the sinuses.

If your child sees an ENT specialist, the doctor will examine his/her ears, nose, and throat. A thorough history and examination usually leads to the correct diagnosis. Occasionally, special instruments will be used to look into the nose during the office visit. An x-ray called a CT scan may help to determine how your child's sinuses are formed, where the blockage has occurred, and the reliability of a sinusitis diagnosis.

When is surgery necessary?

Surgery is considered for the small percentage of children with severe or persistent sinusitis symptoms despite medical therapy. Using an instrument called an endoscope, the ENT surgeon opens the natural drainage pathways of your child's sinuses and makes the narrow passages wider. This also allows for culturing so that antibiotics can be directed specifically against your child's sinus infection. Opening up the sinuses and allowing air to circulate usually results in a reduction in the number and severity of sinus infections.

Also, your doctor may advise removing adenoid tissue from behind the nose as part of the treatment for sinusitis. Although the adenoid tissue does not directly block the sinuses, infection of the adenoid tissue, called adenoiditis, or obstruction of the back of the nose can cause many of the symptoms that are similar to sinusitis, namely, runny nose, stuffy nose, post-nasal drip, bad breath, cough, and headache.

Sinusitis in children is different than sinusitis in adults. Children more often demonstrate a cough, bad breath, crankiness, low energy, and swelling around the eyes along with a thick yellow-green nasal or post-nasal drip. Once the diagnosis of sinusitis has been made, children are successfully treated with antibiotic therapy in most cases. If medical therapy fails, surgical therapy can be used as a safe and effective method of treating sinus disease in children.