An otolaryngologist-head and neck surgeon will, for the most part, advocate surgery when antibiotics and other medical treatments fail to alleviate chronic sinusitis or multiple episodes of acute sinus infection. Before considering surgery, the otolaryngologist will typically prescribe four to six weeks of antibiotics plus sprays, decongestants, and possibly antihistamines and steroids.

There are circumstances when immediate sinus surgery is warranted. Malignant tumors in the sinus cavity, although rare, sometimes do not respond to radiation and chemotherapy and require surgical removal. Surgery may be the only option for some patients whose sinus condition aggravates other medical problems such as asthma. Cancer patients, having a poor immune system, will require drainage at the onset of a sinus infection (to determine the exact organism causing the infection and aid in choosing the antibiotic). 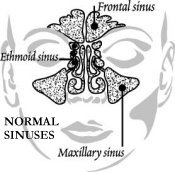 Antibiotics are generally effective for most cases of acute sinusitis resulting in severe facial pain and pressure. Other treatments for lingering symptoms include sinus irrigation, which requires the placement of an instrument in the maxillary sinus to flush out that cavity with salt water.

Two types of acute sinus infection require special attention from a specialist. A severe infection of the frontal (forehead) or sphenoid sinus (behind the eyes) can be very serious. If oral or intravenous antibiotics are not effective, surgical drainage of the sinus may be undertaken. The sphenoid sinus can be accessed surgically through the nose or through an incision under the eyebrow. The latter procedure requires hospitalization.

Twenty years ago, otolaryngologist -head and neck surgeons would perform surgery on the individual sinuses that had become infected, leading to the use of procedures such as the Caldwell-Luc operation.

Since then, the development of endoscopic sinus surgery (ESS) ushered in a new philosophy allowing the surgeon to target the ostiomeatal complex (OMC), an area in the anterior ethmoid sinus region. Obstruction in the OMC can lead to subsequent infection of the maxillary, frontal, and sphenoid sinuses. Accordingly, endoscopic sinus surgery, a procedure through the nose, removes thickened and diseased tissue that blocks the OMC. Most of the healthy tissue in the sinuses is undisturbed allowing rapid recovery.

Endoscopic surgery can also be utilized for removal of polyps and to straighten the septum thus restoring a normal flow from the sinuses. Unlike other sinus surgical procedures, endoscopic sinus surgery has minimal and usually temporary effect on the patient's appearance.

What to expect from endoscopic surgery 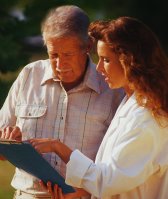 The endoscopic procedure usually lasts from one to three hours and is performed using general or local anesthesia. Generally, the patient goes home after surgery unless other medical conditions complicate recovery.

Full recovery may take several weeks. Dry blood, mucus, and crusting in the nose may occur, presenting symptoms of a severe cold or sinus infection. Nasal irrigation or salt-water sprays and antibiotic lubricants as recommended by the surgeon to facilitate normal sinus activity. Proper post-operative care is essential to prevent scar formation and allow normal healing. The surgeon performing the procedure will generally perform all required follow-up procedures.

Patients who depend on their voice for their livelihood should be warned that endoscopic sinus surgery may have an effect on their resonance. Additionally, some patients may have underlying nasal mucosal problems that remain after surgery. This is seen in highly allergic individuals or asthmatics.

The information contained in this fact sheet was drawn from The Sinus Source Book, written by Deborah Rosin, MD, an otolaryngologist-head and neck surgeon. The book is published by Lowell House; ISBN 1-56565-643-1.